I know it may not seem like it here, but I am alive. I haven't blogged in a while because I kept getting spam on my LJ. :/ Annoying!

In the mean time I was picked up by an agent, got asked to illustrate a Fantasy Art instructional book, Grimm's Dark Tales, for Walter Foster in their FANTASY UNDERGROUND line, redesigned my website, started picking up wonderful clients (both publishers and self-pubs) for my design biz, broke with said agent, started new ms KILL HEART, finished DARKNESS BRUTAL, and just last week I got an offer from a new agent for that.

I'm opening up for commissions for the New Year and you can email me through my website for rates on character creation, cover design, and photoshopping yourself into an elf ;) 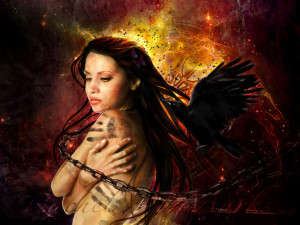 TEASE: Sixteen-year-old Aidan can see demons, smell emotions, and feel the past in his skin, but will it be enough to save his little sister from the deal his mom made with the Devil all those years ago?

I'm making progress on the new ms (5k this week), trying to distract myself from the full requests of GOLDEN waiting with agents. It won 1st place in the Codex Novel Contest for 2011 and I was really excited about that. I also had one agent who has asked today for a revamp and resub, which I'm a little nervous about. But I'm going to just take it one thing at a time and try my best. He had some great tips and ideas, and I'm excited to see what I can do with it (world-building mostly).

In the mean time, I thought I'd share an image with you guys--I don't think I've posted this one yet. It's still not quite done (I'm adding butterflies) but here's the "before." Let's see if you can tell where I'm putting the little buggers...

My last post here I had just finished GOLDEN (YAY). Now, I'm racking up the rejects (not so yay). But, hey, we don't do this for the kudos, do we? If we did, God help us...lol. I've also been homeschooling my two older kids through a Charter school, and bargaining with the staff of the Charter to let me use my own methods/curriculum has been exciting. They've been great, but it's been loads of time and work and research. My son has several learning disabilities and while the State has their ways, I know my son better than anyone, and we're enjoying learning together and growing. Satisfying. But still, a lot of work. Then my dad got very very sick and ended up going in and out of the emergency room for about a month. It's been quite the ride with no writing time in site. *collapses*

To kick the blues of all the insanity I decided to put one of my novellas out on Kindle and Nook. I'm so tired of waiting. I know that nine years isn't a whole lot in the scheme of some writer's stories but with cancer and near-death mixed in there I feel like I'm waiting for a guest that's never going to show up at my door, no matter how pretty I've made my house. Or they'll just stand in the doorway and sneer at the cat hair on my floors...

Winter Rose is one of my soul stories. It's not typical or simple, but it's probably the best work I've done or will do (she's had a nine year journey all her own). So, I'm presenting her to the world, and hoping she's received with open arms by a few readers, hoping that she'll speak to someone's heart and maybe open an eye or two. And then I can say, all this wasn't a complete waste of time and sweat and blood.

I also did the cover myself: You can buy her on Kindle

Yes, it is true. 89k and will probably grow and shrink a little as the editing process begins. I'm taking a few weeks off before jumping in on that, though. A little camping, a little spring cleaning and volunteering at my daughter's school, then it'll be back to the grind and making GOLDEN the most shiny little lady she can be.

A two year journey that consisted of two tossed out half-drafts with a detour through chemo and two surgeries and a hugely bad case of writer's block: Phase one, complete...

This weekend was slow going on the words front, as you can see. This one scene was taking FOREVER to get through. *GACK* I guess I should be glad I got it finished (even though, I'm pretty sure it sucks). I'd really been on such a roll. Ah...the good old days. Oh, well....back to the grind.

I'm low on the count, but I'm hoping I can catch up. Germs and kids wait for no man. Here's to more progress...

I have no idea how it's happening (a miracle, no doubt) but I'm actually coming to the end of GOLDEN. After two and a half years and three drafts I feel like I'm reaching the end of a very long journey. Of course, I'm not there yet, but I can see it--right there!--a light at the end of the tunnel.

It's weird looking back at the journey of this book. I wonder what it all means (something I may post in detail on later in part 2). What made me determined to finish it in spite of it all? I was wondering there for a while if I was ever going to be able to write again. Like all the life of my words were sucked out. Because all the life had been sucked out of me.

Something to think about: how much does our journey in life leak into our books?

When I started GOLDEN it was full of darkness and angst. I began it the summer before I was diagnosed with cancer and had been feeling depressed and sick for three years straight with no answers--I was fed up at this point in my life. During the chemo adventure it was almost impossible to write at all. Then when it was over and I started to grow the chia pet back on my head, the world looked different. I was different. The book morphed again. And then I went through three months of thinking I was sick again and the doctor's faces said: this time would be the one that killed me. And again, a turn. When news came back that the second mass wasn't cancer It was like a light switch turned on in my chest. I was here for a reason. This time I set the current GOLDEN aside and began all over again. A new beginning for a new writer. And as I look back, I wonder: how much of the final story is going to carry pieces of my own tale?

How much of your work carries your tale?

Here's my Tease for Tuesday from an old version of GOLDEN:

The gate looms over this sector like a shadow of death, showing all where the real power lies. For twenty feet it climbs, a strange weaving of brick and earth, dead trees and concrete. Shapes peek out from the folds and bends of the structure: pieces of statues, arms, legs and faces. They reach out, they try to run away, they weep, but the gate holds them there, frozen bits of terror and brokenness.

My heart speeds up as we move closer. Sweat beads on my upper lip despite the cold air. The wall stretches straight out as far as I can see to my left, and my right. Its makeup is more of the same concrete and dirt, but brambles and dead limbs climb over that, with thorns as sharp as knives, making it impossible to climb.

I've never been here. I couldn't ever make myself come this close. I've never been to Trade, never met a Court brat face to face until last night. I never wanted to see where I was from. I hate it too much, that part of myself. It's like filth on my soul. I know it's why I have visions. Why I'm twisted and wrong inside.

My feet stop, making my captor falter. I can smell something…strange but familiar. It leeks from the towering barrier in front of us, raking at the inside of my head, making my eyes burn again. I can't go in there.

The pain pools into my bones, blurring everything.

No! I can't let it swallow me. They'll take me in there. Inside that terror.

I stumble and try to back up. I gag from the agony in my arm and my legs betray me, going limp.

"Give her to me, you fool! You've broken her arm!" Colm turns to me and grabs me up from the ground, throwing me over his shoulder like a sack of trash. "Just a moment, Areana, and the hurt will be over." His voice is breathless, every syllable an obvious effort. "Open it, Wyld, I cannot."

The blood pools in my head, behind my eyes. Everything burns. The fire inside me is a torrent. I can't see but I can hear a rumbling, a thundering. Everything shakes and rattles around us, echoing in my gut. And the smells--oh, god, the smells--twisting inside me, tearing visions to the fore. The girl is there. I am her. White silk molds against our body with the wind. The field of green lies all around us, so lovely. I know the man will come. The man with the crimson dragon on his chest. His hands…hands that take, that burn. The screams surface around us, surrounding us. Like thousands of souls burning at once, crying for death. And all of it changing, warping with the pain, turning to blood.

It covers the girl. It covers me.

The gate is open.

I'm very excited to announce that I have signed a new licensing contract for my art! This one is with Fantasy Fabric Blocks. I'm a huge quilter and LOVE to design bags and wall hangings, so this is a major thrill for me to be able to have my own art available to play with. Can't wait to make my first piece!

So, my writing... As you know, I've been offline for a while now, mostly because it takes so much time and energy--of which I have little these days. But, I determined a few weeks ago to not let life crap mess with my goals anymore. I'm not going to let my worry about what's happening tomorrow keep me from finishing what I started yesterday. And I started this writing journey seven years ago, and am in no way finished...lol. So far I'm making good progress. 14k more on Golden and writing a little more every spare second I get.